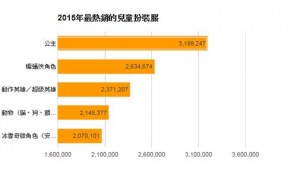 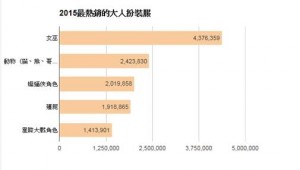 Top 25 Haunted Places Around the World
The Halloween of our youth may have been more about dressing up like cartoon characters and prancing around the neighborhood asking for candy, but we want more from our holidays once we grow up. Plenty of destinations around the world make for great places to spend Halloween, sometimes simply because they’re notorious for excellent parties — but if you prefer to focus on the more hair-raising aspects of the holiday, this list of haunted places around the world is for you. 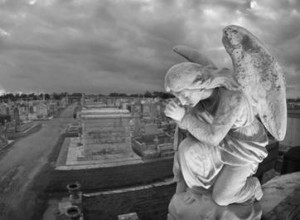 New Orleans is a city of ghosts and vampires, and even if you don’t believe in those legends there’s no getting around the city’s famous history of voodoo and black magic. It doesn’t take much imagination to see how one of the above-ground cemeteries — the so-called “Cities of the Dead” — would make a fine setting for a ghost story.

Las Vegas knows how to party, and the city is the place to be if you’re looking for the grown-up version of costume parties, where inventive cocktails have replaced candy bars. But Sin City also has its fair share of haunted places. Ghosts have been sighted at several hotels, including the Luxor, MGM Grand and Circus Circus. The Flamingo Hotel is said to be haunted by legendary Vegas personality Bugsy Siegel.

Halloween food around the world
For most American families, Halloween “treats” mean one thing: candy – mounds of bite-size morsels heaped into kids’ bags in exchange for that magic phrase: “Trick or treat!” Other cultures, however, celebrate All Souls’ Day, All Saints Day or Dia de Los Muertos (Nov. 1 and 2), from which our Halloween (All Hallows Eve) is derived, with different sorts of treats. Why not expand your family’s cultural horizons this Halloween by trying some of these traditional sweet treats from around the globe?

Here are a few ideas about food from Halloween around the world – about what people eat in other countries, and recipes to go with them.
這裡有ㄧ些世界各地萬聖節人們會吃些什麼的點子

Soul cakes (England and Ireland): These sweet, round cakes were traditionally given out in England and Ireland on All Saints Day or All Souls’ Day during the Middle Ages to those who went door-to-door saying prayers for the dead in what may be the forerunner to today’s trick-or-treating. They can be made with raisins and currants and aromatic spices like allspice, nutmeg, cinnamon and ginger. 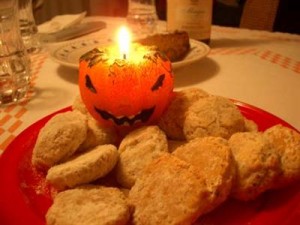 Fave dei morti (Italy): In Italy, All Souls’ Day may be celebrated with delicate cookies (sometimes white, brown or pink) – made with almonds and covered with sugar – called Fave dei Morti or Ossei dei Morti, whose name translates to “Beans of the Dead” or “Bones of the Dead.”

Pan de Muerto (Mexico):  This soft sweet bread is a Dia de Los Muertos (Day of the Dead) tradition in Mexico, sometimes eaten at the grave of a loved one or placed on an altar. It may be flavored with orange zest or decorated with a teardrop or bones, perhaps placed in a circle to represent the cycle of life. Some people even mold the bread into animals, angels or other evocative shapes.

Guagua de pan (Ecuador): These “bread babies” – sweet rolls molded and decorated to look like small children or infants – are part of the Day of the Dead tradition in parts of South America. Often made of wheat and sometimes filled with sweet jelly, they may be exchanged as gifts between families and friends or used ceremonially.

As one of the world’s oldest holidays, Halloween is still celebrated today in several countries around the globe, but it is in North America and Canada that it maintains its highest level of popularity. Every year, 65% of Americans decorate their homes and offices for Halloween…a percentage exceeded only by Christmas. Halloween is the holiday when the most candy is sold and is second only to Christmas in terms of total sales
身為世界最古老節日之一的萬聖節，至今仍為世界許多國家所慶祝，但在北美和加拿大，還是最受歡迎。每年有65%的美國人會為萬聖節的到來特地裝飾家裡和辦公室，這是除了在聖誕節才有的盛況。萬聖節是除了聖誕節之外，糖果銷量最多的節日。

Austria
In Austria, some people will leave bread, water and a lighted lamp on the table before retiring on Halloween night. The reason for this is because it was once believed such items would welcome the dead souls back to earth on a night which for the Austrians was considered to be brimming with strong cosmic energies.
奧地利
在奧地利，有些人在萬聖節當晚休息前，會把麵包、水以及點亮的燈泡留在桌上。原因是據說這些東西會迎接亡魂重回世間，而奧地利人認為這會招致無限的能量。

Belgium
The Belgians believe that it is unlucky for a black cat to cross once’s path and also unlucky if it should enter a home or travel on a ship. The custom in Belgium on Halloween night is to light candles in memory of dead relatives.

Canada
Modern Halloween celebrations in Canada began with the arrival of Scottish and Irish immigrants in the 1800s. Jack O’Lanterns are carved and the festivities include parties, trick-or-treating and the decorating of homes with pumpkins and corn stalks. 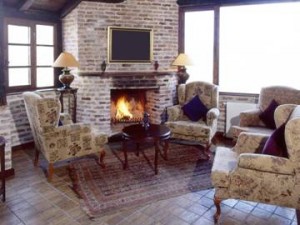 England
At one time, English children made “punkies" out of large beetroots, upon which they carved a design of their choice. Then, they would carry their “punkies" through the streets while singing the “Punkie Night Song" as they knocked on doors and asked for money. In some rural areas, turnip lanterns were placed on gateposts to protect homes from the spirits who roamed on Halloween night. Another custom was to toss objects such as stones, vegetables and nuts into a bonfire to frighten away the spirits. These symbolic sacrifices were also employed as fortune-telling tools. If a pebble thrown into the flames at night was no longer visible in the morning, then it was believed that the person who tossed the pebble would not survive another year. If nuts tossed into the blaze by young lovers then exploded, it signified a quarrelsome marriage. For the most part however, the English ceased celebrating Halloween with the spread of Martin Luther’s Protestant Reformation. Since followers of the new religion did not believe in Saints, they saw no reason to celebrate the Eve of All Saints’ Day. However, in recent years, the American “trick or treating" custom, together with the donning of costumes for going door-to-door, has become a relatively popular pasttime among English children at Halloween, although many of the adults (particularly the older generations) have little idea as to why they are being asked for sweets and are usually ill-prepared to accommodate their small and hopeful callers. 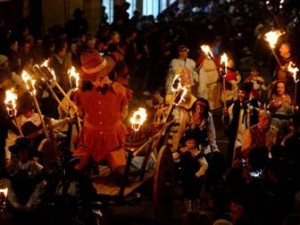 France
Unlike most nations of the world, Halloween is not celebrated by the French in order to honor the dead and departed ancestors. It is regarded as an “American" holiday in France and was virtually unknown in the country until around 1996. 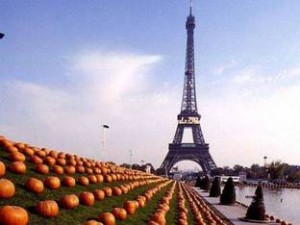 Germany
In Germany, the people put away their knives on Halloween night. The reason for this is because they do not want to risk harm befalling the returning spirits. 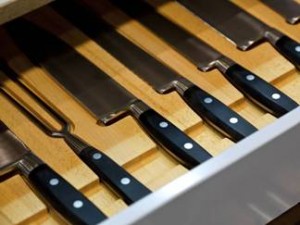 Ireland
In Ireland, believed to be the birthplace of Halloween, the tradition is still celebrated as much as it is in the United States. In rural areas, bonfires are lit as they were in the days of the Celts and children dress up in costumes to spend the evening “trick-or-treating" in their neighborhoods. After the visiting, most people attend parties with neighbors and friends. At these parties, many games are played, including “snap-apple," in which an apple on a string is tied to a doorframe or tree, and players attempt to take a bite out of the suspended apple. In addition to bobbing for apples, parents often arrange treasure hunts with sweets or pastries as the “treasure." The Irish also play a card game where cards are laid face-down on a table with sweets or coins beneath them. When a child selects a card, he or she receives whatever prize might be found there. A traditional food is eaten on Halloween called “barnbrack." This is a type of fruitcake which can be baked at home or store-bought. A muslin-wrapped treat is baked inside the cake which, so it is said, can foretell the future of the one who finds it. If the prize is a ring, then that person will soon be wed and a piece of straw means a prosperous year is forthcoming. Children are also known to play tricks upon their neighbors on Halloween night. One of which is known as “knock-a-dolly," where children knock on the doors of their neighbors but then run away before the door is opened. 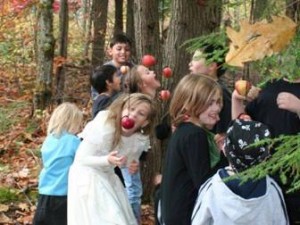 Mexico, Latin America And Spain
Among Spanish-speaking nations, Halloween is known as “El Dia de los Muertos." It is a joyous and happy holiday…a time to remember friends and family who have died. Officially commemorated on November 2 (All Souls’ Day), the three-day celebration actually begins on the evening of October 31. Designed to honor the dead who are believed to return to their homes on Halloween, many families construct an altar in their home and decorate it with candy, flowers, photographs, fresh water and samples of the deceased’s favorite foods and drinks. Frequently, a basin and towel are left out in order that the spirit can wash prior to indulging in the feast. Candles and incense are burned to help the departed find his or her way home. Relatives also tidy the gravesites of deceased family members, including snipping weeds, making repairs and painting. The grave is then adorned with flowers, wreaths or paper streamers. Often, a live person is placed inside a coffine which is then paraded through the streets while vendors toss fruit, flowers and candies into the casket. On November 2, relatives gather at the gravesite to picnic and reminisce. Some of these gatherings may even include tequila and a mariachi band although American Halloween customs are gradually taking over this celebration. In Mexico during the Autumn, countless numbers of Monarch butterflies return to the shelter of Mexico’s oyamel fir trees. It was the belief of the Aztecs that these butterflies bore the spirits of dead ancestors. 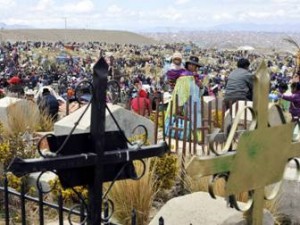 Sweden
In Sweden, Halloween is known as “Alla Helgons Dag" and is celebrated from October 31 until November 6. As with many other holidays, “Alla Helgons Dag" has an eve which is either celebrated or becomes a shortened working day. The Friday prior to All Saint’s Day is a short day for universities while school-age children are given a day of vacation.

HALLOWEEN TIME LINE
FIFTH CENTURY B.C.E.
The Celts observe the festival of Samhain at the end of October, when they believe ghosts and demons
roam the earth more so than at other times.
FIRST CENTURY C.E.
The Romans conquer the Celts and adopt the spiritistic rituals of Samhain.
SEVENTH CENTURY C.E.
Pope Boniface IV is said to have established the annual celebration of All Saints’ Day to honor martyrs. *
ELEVENTH CENTURY C.E.
The second of November is designated as All Souls’ Day to commemorate the dead. Observances surrounding All Saints’ Day and All Souls’ Day are collectively called Hallowtide.
EIGHTEENTH CENTURY C.E.
The name of the holiday, Hallowe’en (Hallow Evening) appears in print as Halloween.
NINETEENTH CENTURY C.E.
Thousands of people who move from Ireland to the United States bring with them Halloween customs that, in time, combined with similar customs of emigrants from Britain and Germany, as well as Africa and other parts of the world.
TWENTIETH CENTURY C.E.
Halloween becomes a popular nationwide holiday in the United States.
TWENTY-FIRST CENTURY C.E.
Commercial interest in Halloween grows into a worldwide multibillion-dollar industry.